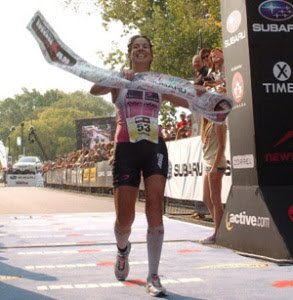 Photo: slowtwitch.com
SLS3 athlete Tereza Macel had a picture perfect race at the Ironman Canada that started with a superb swim time of 51:11 and a 2 minute lead on Belinda Granger.

Macel pretty much had flown the coup and further and further distanced herself from her pursuers. Her 4:58:13 bike split got her back into T2 14 minutes up on Granger and 16 minutes up on Tara Norton. Everyone else was petty much in a different time zone and only a complete melt down by Macel could have prevented the inevitable.

Macel though ran a 3:17:52 marathon and that time was only beaten by Janelle Morrison's time of 3:17:49. She crossed the finish line in 9:11:20 for her third Ironman title - racing in compression socks - and almost half an hour ahead of runner-up Granger.
Posted by SLS3 at 10:44 AM No comments:

SLS3 athletes Bella Bayliss and Jocelyn Wong raced EmbrunMan in France. This was Bellas 4th time racing this one so she knew what she was getting herself into! "I think at times the others were a bit surprised at what the course was throwing at them!!"
Bella lead the first lapon the swim, then Erika Csomor came to lead the 2nd lap.
"Erika and I came out of the water just ahead of the first men who started 10 minutes behind us. We rode together for the fist 50km. Even though I felt good and strong for that first hour, Erika seemed to be warming up into it and got stronger. I decided to let her go and that I should ride at my pace. Going a touch too hard in the first 50km meant my legs felt horrible for the next 110kms!! Eeeek!!! I worked with what I had and they began to come around again at about 165km."
Bella managed to get off the bike with her run legs on! She ran the first 21km easily in her Triathlon shorts. "I took the lead from Erika at 10 km. The next 21km did not feel so good! The last 10km I was just hurrying quickly!
But still, it got me to the finish line first and in a record time of 11.02.49!"
Jocelyn finished a strong 5th place an 62nd overall. 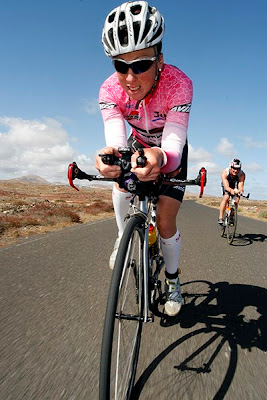 I could not be happier!!
It was SO special to win Ironman in my home counrty!

I went into the race feeling determined and strong. But different to normal! As I have had an injury in my hamstring for the past few months, and for the past 8 weeks my training has not been normal.

When it came to the race weekend, I felt calm and down to earth. I think the injury has made me realise how much I really love what I do. I love to train and I love to race.
Having the possibility that I may not race Ironman UK was so upsetting. Just to be there and aiming at a podium made me SO happy.

I came out the water really close to Hillary. That was my best swim ever! One thing I have been able to do while being injured, is SWIM!! So that showed!

I got on my Cervelo and really enjoyed riding it. The plan was to go steady, not crazy. I found myself in the lead by mile 20. That is a first! Never have a led an Ironman so early.
At mile 100 a girl overtook me. I felt like I was flying, but this girl was something else! Very very stong.
I was pretty mad actaully. She was ruining my plan. I had sort of told myself at this stage that this could be my race.
I let her go. There was no way I could go with her.
I concentrating finishing my ride off.

As soon as I began to run, my running legs were there. The girl, Karin Gerber, had taken 5 minutes from me in 12 miles!
I was very happy to see her at mile 5 on the run. I gave her nothing. I ran past her fast and left her in my dust, actaully it was not dust. It was lots of mud because it was a wet English muddy track we were running down!

I had to concentrate. I had to get myself to the finish line now. And hopefully in first place. I was desperate to hold on. At mile 13 my hamstring was really tightening up. But I kept myself together and tried to run in a way that would not hurt the hamstring more.
I know Hillary is strong and if I gave here a chance, she would come and get me. On the out and backs I would see her so I kept the pressure on so that the gap was comfortable for me.

I wanted this race so much. I had my chance and I took it. It was amazing, great and brilliant to cross that line in first place. A very special win in my home country and after such a testing time with my first ever injury.
Posted by SLS3 at 11:46 AM No comments: