San Diego (March 19, 2013) – SLS3 is pleased to announce its sponsorship of professional triathletes Stephen and Bella Bayliss. The ironcouple will be wearing SLS3 compression socks while training and racing.
Bella is a 12x Ironman Champion while Stephen has won 2 Ironman titles.
“We are really pleased to be affiliated with SLS3,” said Bella Bayliss. “We had the chance to test the compression clothing before and I love it.”
” Bella and Stephen got our attention in the last few years with their impressive results,” said Sebastian Linke, owner of SLS3. Adding to our dynamic list of professional athletes, we are looking forward to big things in 2013.
Bella and Stephen will start her 2013 season with SLS3 at the Challenge Fuerteventura. They join SLS3 athletes Petr Vabrousek, Chris McDonald, Dana Wagner and Heleen bij de Vaate. 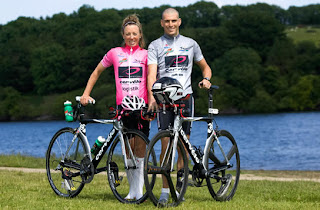 About Bella and Stephen:
Married in November 2008, Bella and Stephen Bayliss are known as Britain’s Iron couple. They met while at the ITU World Long Distance Championships in Sweden and started dating a year later. Although both triathlete’s are hugely successful in their own right, together they are Britain’s most successful Ironman couple.

The couple are based in Switzerland where they can relax after their hectic race schedules and training around the globe and get prepared for the next season.

SLS3 is a manufacturer of sport compression and triathlon race apparel designed by medical and former triathlon professionals. SLS3 products enhance performance, with an emphasis on technical design for comfort. The company strives to produce the best possible products to serve customers who are
looking for comfort and performance. Made in the U.S.A. is an important part of the SLS3 triathlon apparel line. The company hires local staff and purchases materials from the highest quality vendors available.
Posted by SLS3 at 7:41 AM