Keys to pace yourself during a Triathlon

Years ago I heard an interview with Mike Pigg. For those unfamiliar with the Piggman, let me just say he was one of the greats – an accomplished swimmer, a beast on the bike and a competent runner. In the late 80s and 90s, Pigg won more than his fair share of Olympic distance non-drafting races around the world. During an interview in relation to the Hawaii Ironman, Pigg said “this is completely different to racing an Olympic distance race. In an Olympic distance race you can just let it all out. Here [Ironman], you have to be a little smarter and pace yourself”.
Pacing over any distance is crucial, but the distance of the event will determine your pacing strategy. Horses for courses.
The keys to a successful race are appropriate: 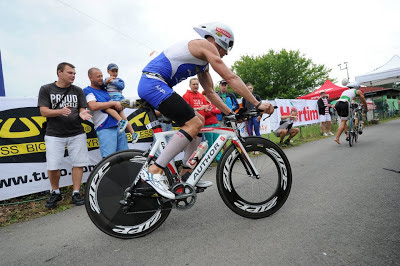 Pacing and nutrition are particularly important as the distances start to get longer and longer. The only similarity between a sprint distance triathlon and an Ironman distance race is the fact you swim, bike and run in both. Physiologically and nutritionally speaking, they are two completely different animals – Olympic and half IM distance events sit somewhere between the two. In fact, in relation to the demands they place on the body, half IM events are more akin to Olympic distance races than they are to the Ironman.
So, let’s begin with a look at some basic background information.
The human body uses two energy systems:
In the anaerobic system there are a further two sub-systems:
Energy to fuel activities in most sports, triathlon included, have contributions made from both energy systems. The onus varies and is based on the interplay of (a) the event distance and (b) speed of the athlete. As such, a sprint distance event has more reliance and use of the anaerobic system(s), whereas an Ironman is more reliant on aerobic metabolism. Therefore, the emphasis placed on developing these different systems in training needs to reflect the demands of the race distance.


How do you determine this?

For many athletes, trial and error is often the method employed. Train, go out and do the Ironman as hard as you can and blow up midway through. Sound familiar? There are smarter ways of attacking such events.
As a starting point – freshen up, then go out and do some time trials or lab testing (see: www.weshealth.com.au and follow the links to the Peak Performance Lab). Brad Beven and I work with athletes in and out of the lab. The athletes who don’t come through the lab do a series of simple field-based tests to ascertain their pacing strategies. We can use these to optimise their training programs for their specific distance event as well as their pacing on race day. To further validate these tests, if available a blood lactate reading can be taken during the efforts.
The testing includes:
Swimming – five sets of 200-to-300 metres at maximum effort. Only take a break between efforts to record you split times.
Cycling – maximum effort time trial on flat terrain for 40-to-60 minutes recording average heart rate, power output (if you have a power monitor) and cadence.
Running – maximum effort for five-to-six kilometres. Record each one kilometre split time, heart rate per kilometre, average heart rate for the effort and overall completion time.
All of these tests are designed to identify the anaerobic threshold – the point where the body shifts from producing energy predominately from aerobic metabolism to having a greater contribution from the anaerobic system(s). From a training/pacing perspective this is a crucial point to know as working at the anaerobic threshold burns carbohydrate quickly and our bodies only have a limited amount of carbohydrate stored as muscle glycogen. If you exhaust the glycogen store, you’ll hit the wall and have to slow down. This is because you become more reliant on the aerobic energy system, and fat, which requires exercise to be slowed.
Typically, Olympic distance athletes use a lot of muscle glycogen and struggle initially to step straight up to Ironman distance races – certainly at an elite level. They need time to refine their training to develop their aerobic metabolism, fat burning and glycogen sparing capacity, pacing and race day nutrition strategies.
Here, I’ll help you short circuit the trial and error merry-go-round with some helpful hints for training, racing and nutrition strategies to fast track your understanding of the energy system approach.
Once you have run through the tests and recorded all the info you need (i.e. split times, heart rates, etc.), here are some useful tips:

The vast number of athletes I see train too hard, too often and subsequently fail to develop their aerobic energy system. Even if you’re training for a sprint distance race, you need to develop an aerobic base. The best sprint distance athletes in the world take more than 50 minutes to finish an event. Try holding your breath for 50 minutes. If you can do that – train intensely all the time. If you can’t, then you need to develop your aerobic metabolism. Do this by training at least one-to-two sessions per week at 80-to-85 per cent of the heart rates/split times recorded during your tests. The longer the event you’re training for, the more sessions of this sort of training you do and the further distance you go. However, whatever triathlete you are or want to be, you need to train for an aerobic base.
When the working heart rates are set (for example on the run), many athletes initially find themselves walking. However, the walk quickly becomes a jog, which then becomes a run at the same heart rate. This is how you know the efficiency and aerobic system is responding, improving and developing. Also, you’ll very quickly start to become more lean as fat is used for fuel rather than muscle glycogen.

At 12 weeks out from competition, training is completely different to the sessions you perform two weeks before the event.
Your training should progress through three active training phases:

I remember posing this exact question to former Olympic cycling gold medal winner Kathy Watt in relation to the 40-kilometre time trial event and Kath’s response hit the nail on the head. To paraphrase, she suggested riding at a couple of beats per minute above and below your anaerobic threshold for a 40-kilometre time trial.
Many athletes make the mistake of going out too hard, beyond their anaerobic threshold, creating oxygen debt and are forced to slow down. They blow up two thirds of the way through the event and then limp home. It is far more effective to go out at your anaerobic threshold and then build beyond the threshold during the closing stages of the effort. Then the inevitable repayment of your oxygen debt occurs AFTER you cross the finish line rather than before.

From a pacing perspective, maintaining a higher average speed throughout the race is far more important than your pace for any one segment or individual discipline. The only way of ensuring this is to:
All the best for race day - go and smoke ‘em.