If swimming in the open water was a magic show, superfish and Surf Ironman Champion Guy Leech would have more tricks than David Copperfield. Leech pulls some out of his swimming cap here and treats us to the best.
A few years ago, I competed in a team at the Mooloolaba triathlon event. The days leading up to the race had pumping surf and I thought, “great, I’ll feel right at home out there and hopefully give our team a head start”.
That hopeful head start was quickly reeled in when “too dangerous” was the call made by the team at USM Events. They pulled the pin on a surf swim, opting to line up competitors along one of the local canals, effectively making it a flat water swim. Fair enough, the majority of age group triathletes probably come from non-swimming backgrounds, let alone surf swimming.
Here are some tips to make your next open water swim a little more proficient. After all, there’s a big difference between being capable in the swimming pool compared to carving up the ocean.
Experience is invaluable
Before entering an event, build up your experience by doing some ocean swims. Having been in the open water beforehand, you’re less likely to freak out when there are 100 other sets of arms and legs being thrown around you in the heat of battle and argy-bargy of a race.
Get together with a few friends, head down to the beach or local dam, pick a point in the distance and swim to it. Swimming in a group will give you a little extra confidence should you get into trouble. Once you’re out in the open water you can’t really swim to the side and hang onto a wall like you can in a pool. Simply knowing others are around can be reassuring for the novice open water swimmer.
Learn bilateral breathing
Bilateral breathing means you are able to breathe on either side of your body. Firstly, this helps to balance your stroke as you get a chance to watch what both arms are doing under the water in training. In a race situation, it helps if the chop is coming in from one side, which may be your usual breathing side and you’re able to turn to the other to get a breath. There’s nothing worse than repeatedly turning to one side for a breath and getting a mouthful of water rather than air.
Particularly given most triathlons in Australia start bright and early in the morning, if you can only breathe to one side and the sun happens to be rising on that side, it’s a pain in the proverbial to be almost blinded every time you go to take a breath. So, breathing bilaterally is a great skill to develop for a variety of reasons.
Take advantage of drafting
Unlike competitive open water swims such as those of the Olympic Games, drafting during the swim portion of a triathlon is legal. Simply put, you’re nuts if you’re not taking advantage of this. You can cut minutes off your swim time if you get this right.
Aim to position yourself in a pack of swimmers of similar experience and speed. There are two ways you can draft off another swimmer – both can be very effective in an open water swim. One way is to swim directly behind a lead swimmer and the other is to swim in the wake of a lead swimmer – just like Duncan Armstrong did to win his Olympic gold medal.
When you’re swimming directly behind a swimmer and close to their feet, the result is a ‘pulling’ effect similar to that created by an outboard motor on a speedboat.
When you’re swimming on another swimmer’s hip and taking advantage of their wake, the effect is similar to body surfing – you just keep pulling yourself over the little wave the other swimmer’s wake creates. This is a much tougher skill to master, but the effects are considerable. My only word of caution with drafting is to not rely 100 per cent on the swimmer you’re drafting off. If they swim a little off course, any advantage you’re getting from their drag will be undone by the extra distance you’re swimming, so make sure you keep an eye on sighting for yourself. 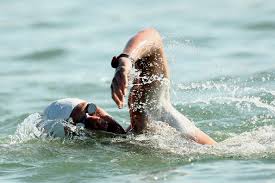 Check the conditions
Have you ever watched the start of a Surf Ironman race? All the competitors and their coaches are at the water’s edge looking at the water – they aren’t just enjoying the scenery! When the gun goes off, the competitors often run in different directions before entering the water. Any idea why? It is because the rips and bars, created by the movement of the waves coming into shore, can provide a huge advantage in races by sweeping you out much faster than swimming in still water or more importantly, against the rip in dead water.
Before you start the race, always check the edge of the beach before running in for the swim. Potholes and uneven surfaces are fairly normal at beaches. A walk out from where you’re starting on the line could save your ankles and the embarrassment from falling over.
Learning how to read water movement isn’t something I can give you in a couple of paragraphs here. My suggestion is to (i) be aware of the potential advantages by learning this skill, and (ii) spend some time talking to, and learning from, those who are experienced in ocean swimming. For example, a number of years ago, I went to Hawaii and watched the Ironman. All those in the know stuck close to the pier at the start of the swim. The flow of the ocean at the pier washed swimmers out to sea from the start line much faster than 100 metres to the left of the start line and away from the pier. Experience counts, so fast-track your own by learning from those who know. It will save you making avoidable and costly mistakes.
To wetty or not to wetty?
If the water is cold, a wetsuit will keep you warm and can improve your performance by 10-to-20 percent with it’s buoyancy effect. This is particularly the case for less accomplished swimmers.
A couple of things to remember with wetsuits: (i) above all, make sure it fits you well, and (ii) practice in the suit if you intend to be wearing it on race day as it changes your position in the water. If it is a long sleeved suit, you need to condition your arms to turn over with rubber around your shoulders.
Sighting
You’ve probably already noticed you don’t have a thick black line running along the bottom of the ocean to help guide you. You have to learn to lift your head and sight in order to stay on track. If you are out for a training swim, look for various land markers. It may be a tall tree or the top of a building, something you can see each time you lift your head to look forward. This gives you the skill during races as you sight marker buoys.
Remember, don’t put yourself in a dangerous situation if your skill level isn’t up to it. The ocean is something that deserves respect! All the best with your next race.