Nate Dressel is on a mission...

Nate Dressel is a Professional Triathlete, an endurance coach,  US Army Green Beret, and a proud husband and father. Currently living and training in beautiful Carmel Valley, CA, Nate can be found on any given day cranking out miles along the coast and through the mountains or running the infinite miles of trails. Here, you can learn more about Nate's background, training, and professional career.
Posted by SLS3 at 10:06 AM No comments:

It is #workoutwednesday and we want to start this year with a healthier approach, so why not do a weekly contest...

If you haven’t met Justin Daerr, you are missing out on probably one of the most easy-going, determined, and hard-working triathletes out there. Spending most of his childhood in Houston, TX, and Crested Butte, Colorado, Justin’s athletic life took place in the mountains snowboarding. It wasn’t until his freshman year at Texas A&M that he raced his first triathlon. The story, as it goes, is that he was asked by a friend if he wanted to compete in an Olympic race the following weekend. Justin’s answer: “Sure.” And thus his career began.

He started with racing short local events until he decided it wasn’t big or crazy enough for his liking. The very next season, he decided to tackle his first Ironman in California, finishing with a time of 12:55 and completely hooked on endurance racing.

Justin became fully immersed in triathlon racing. He began casually teaching fellow athletes, kick-started a triathlon program for college beginners, helped to found the Texas A&M triathlon Team, and interned for a leading triathlon publication until his graduation in 2003. He then officially acquired is triathlon coaching certification and took a direct role in coaching and mentoring aspiring athletes. 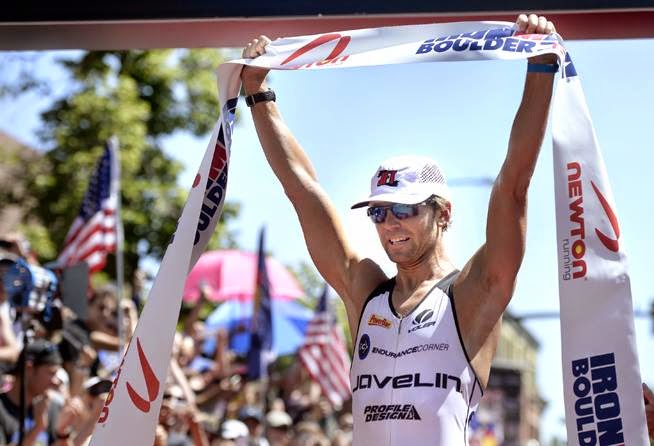 In 2007, Justin moved to Boulder, Colorado to hone in on training. In line with his personal desires, he also began working at Endurance Corner LLC, a company that works for the education, coaching, and training of triathletes. He rose to become a partner in 2012, and currently serves as the Chief Operating Officer, while also continuing to coach on a personal basis.

In addition to his business career, Justin became an active supporter of The Wounded Warrior Project (WWP) in honor of his father, who was severely wounded as a Marine during the Vietnam War. In the past two years, Justin has raised more than $17,000.

Justin never set out to be a professional triathlete, but rather followed his passions to a life fueled by pain, persistence, and fun. What started out as an item on his bucket list, is now a lifetime career and successful obsession for triathlon sport. “We are incredibly honored to be partners with this insane and amazing individual,” Vanessa Evans, SLS3 sponsoring director, divulges. “We try to look for athletes who truly show a passion for not only the race, but for the sport in its entirety.  We believe that Justin represents perfectly this principal, and we look forward to the 2015 season with much anticipation.”


Recently, our own SLS3 Team member, Nate Dressel, was featured in a cover story by SlowTwitch.com. (For the full article, see the attached link here.) From a military enlistee, to a Green Beret, to a now professional triathlete living with his family via motor home in California, Nate has been through the ringer as far as life experiences goes. But, as we note his accomplishments and success as a pro, it is his humility and inspired words that we would like to share with all athletes looking to pursue endurance sport.

Nate originally enlisted with the Airborne Infantry in 2004, until he was approached by a Special Forces Master Sergeant to pursue the Green Berets. Sure enough, a few years later he was assigned to the 1st Special Forces Group (Airborne), in Ft Lewis, WA. It was during his time in the military that he raced his first Tri with a friend in 2006, The Mission Man Sprint Tri in Burlington, NC.  As he describes it, “I did not drown, completed the bike on a borrowed yellow steel Schwinn, and puked three times on the run. It was awesome!”


From there he continued the dual partnership of serving his country and racing triathlons. It wasn’t until this past September 2014 that he stepped down from active status as a Special Forces Medical Sergeant, bought a motor home with his family, and moved to California to train as a professional.


“The motor home was certainly not our lifestyle goal,” he tells SlowTwitch, “but at the time we made the decision to motor home full-time, it was a necessary step to get on with our lives and pursue this career. We knew that we wanted to be somewhere in the Monterey Bay area, but we had no jobs, no guaranteed income, and really didn’t even know where in the area we actually wanted to live. My wife’s family had gone to Moss Landing when she was a kid and I have raced Tri California’s events for years so we just knew it was gorgeous, temperate, and would be a great place to train year round and give this a go.”


As a pro, Nate has worked to be more than a seasoned endurance athlete. His goals go beyond being a top finisher to being a true representative and supporter of this sport. When asked about acquiring his official Pro status, he offered up this introspective response:


“What is an actual pro? Is it the top 5 to 10% of pro license holders who repeatedly win enormous races, grace the covers of magazines and ST features on a regular basis? If that’s the case, the rest of us holding licenses are nothing more than camera fodder for the big guys to pretend they actually have competition.

If an actual pro is someone who supports their family, encourages newer athletes to find their love for endurance sports and healthy lifestyle, and generally makes their career through racing, coaching, and being an ambassador for the sport, then yes, I think I’m doing a decent job as a pro.

This tier of professionals is real and attainable; we participate in the local triathlon clubs, the masters swim groups, the group rides, and the fun runs. We are the base of the professional pyramid and the accessible resource for all the newer athletes trying to gain insight into triathlon or looking to improve upon their own PRs.”


Currently, Nate is gearing up for his first race in March, the Oceanside 70.3, and we are all excited and looking forward to was is to surely be a great 2015 season.


For all of you out there, professional or no, remember why you race and the type of competitor you want to be. Nate’s words and active emersion in his sport and community are inspiring to athletes everywhere, and we are proud to have such individuals as a part of our SLS3 team. Congratulations, Nate! And to all of our members, for being the triathletes we can be honored to race alongside of. We are proud of you!

Racing professionally is a job, but it should also be a very enjoyable job.

pictures courtesy of slowtwitch.com
Posted by SLS3 at 12:15 PM No comments: